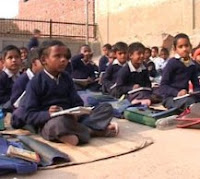 The MCD, which had deployed its teachers to undertake a door-to-door survey in the city this week to detect out-of-school children, is not satisfied with the response it got from the people during the exercise.

The civic body got poor response from the citizens during the survey in resettlement colonies, slum clusters and rural areas and the data gathered will not be enough, officials said.

The MCD is now planning to write to the HRD Ministry so that the exercise can be undertaken afresh, they said.

The MCD's 14,000 teachers had conducted the survey for two days in weekend in 181 municipal wards.

Municipal teachers of 91 of the total 272 wards had conducted a similar door-to-door survey under 'Education for All' campaign in March, Chairman of MCD Education Committee said.

During the survey, teachers tried to find out whether there is any child between the age of 6 and 14 years who is not going to any school, besides the education and economic condition of the family and about physically or mentally challenged children, if any, in the family.

Over this weekend, each teacher was supposed to cover approximately 100 houses. However, in rural areas, jhuggi-jhopri clusters and in resettlement colonies, our teachers faced lot of problems.

In most of the cases, the houses/slum dwellings were locked as the labourers were out on work. In several cases, the parents, especially the illiterate mothers, did not answer the questions as they were not aware of the importance of the survey. The survey has therefore not brought out the exact picture. There should have been ample publicity for the survey.