India's leadership unknown to much of world: survey 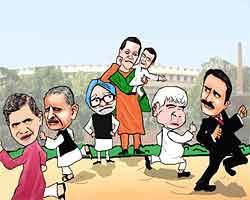 As New Delhi seeks to cement its place as a world leader with its bid for a permanent seat on the UN Security Council, a survey released said that the Indian leadership is not much known in the world.
Nearly half of the world's residents surveyed (44 per cent) don't know enough about the country's leadership to have an opinion, and the rest are mixed.

Across 110 countries surveyed in 2009, a median of 22 per cent approve and a median of 27 per cent disapprove, the Gallup, a public opinion research group, said in a statement.
More than half of people in the former Soviet Union, the Americas, and Europe don't have an opinion about India's leadership, it said adding that this may be understandable given their proximity to the country, but many in Asia also don't have an opinion.

Overall, residents in sub-Saharan Africa and the Middle East and North Africa region are more likely to express opinions about India's leadership, it said.

Gallup said outside of some of its immediate neighbors such as Afghanistan, Bangladesh, and Pakistan, India's leadership is relatively unknown.

However, many of those in the region who have an opinion -- including those in other G20 economies -- tend to approve rather than disapprove, which may be conducive for India as it seeks to expand economic and strategic partnerships, particularly in Afghanistan and East Asia.

In the immediate neighborhood, India gets the highest approval rating in Afghanistan (54 per cent), followed by Sri Lanka (48 per cent), Bangladesh (46 per cent) and Singapore (44 per cent).

As expected as many as 66 per cent of those surveyed in Pakistan disapproved of Indian leadership, while only seven per cent approved.