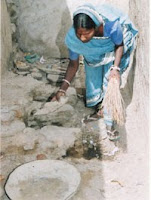 India may be hailed as a world power with impressive economic growth but there are places where people, mostly women, are still engaged in the inhuman age-old practice of manual scavenging.

Thousands of people in Badaun district of western Uttar Pradesh clean 'dry toilets' every morning and get Rs 20 per month from each family in return.

Shockingly, these women remove human excreta from the dry latrines with bare hands -- making their lives unhygienic and undignified.

"We put some ashes on the excreta and remove it with bare hands. We work in a dry latrine once in a day. We mostly complete the work before noon. The next day, when we come for work, it will be filled with waste," said 45-year-old Munni, mother of four children, who belongs to a village close to Badaun town.

Taking serious note of the situation, UNICEF and the district administration, armed with the support of locals, have been able to free at least 2,000 people from the cruel practice in the last four months.

The district, known for widespread poverty, illiteracy, illness and crime, is trying to convert the dry latrines into pour flush ones and provide social security and employment guarantee to manual scavengers to quit the banned profession.

Some of those who quit the job said that it was a virtual release from an age-old bondage.

Around 2,000 people out of an estimated 4,000 who had been engaging in the traditional cruel practice of manual scavenging in the district have quit the profession during the last four months.

Most of the younger women who depend on manually removing human excreta to earn a living, say they want to quit the job.

"I want to leave this job," said 16-year-old Mamta from Wakarpur Khare village where five families quit the job in four months.

Mamta, who married a year ago and has been engaging in manual scavenging since the age of 11, said she is illiterate and there is no other source of livelihood for her.

However, older women who were forced to quit their jobs complain that they are struggling to meet both ends.

Dhan Devi, a 65-year-old woman from Shekhupur village, complained that social security measures provided to them by the district administration were not enough to feed her large family.

"Quitting the job will be very good. But we want work," she said.

District officials said women who engage in this profession face many health problems such as skin diseases and sometimes also face problems like harassment at work places.

UNICEF officials said Badaun has always been a favourite place for Wild Polio Virus because around 60 per cent people use dry latrines and dispose human excreta improperly.

According to a survey done last year, there were more than 15,000 dry latrines in the 73 gram panchayats of the district.

UNICEF provided all ground level support to implement the programme by mobilising people and by creating awareness among the masses about the necessity of using flush latrines.

Initially, it was very difficult as a section of the manual scavengers, who had been into the profession by birth, did not see any taboo or social evil attached to the work.

However, another section of the people were engaged in the profession as there was no other option for them, while a third section remained in the job as people in their villages restricted them from doing any other work.

Manual scavengers, who were ready to quit their work, were given BPL and Antyodaya cards.

Special scholarships were given to the children of the manual scavengers. Some of them, who were eligible, also availed pension schemes.

"Mahatma Gandhi National Rural Employment Guarantee Act (MNREGA) job cards were made for the families and in order to provide immediate relief, new works were started to give employment to them," the official said.

Within a span of two months, 14,000 dry latrines were converted to pour flush ones and 51 villages were completely free of the dry latrine menace.The funds provided to the Gram Panchayats, which were lying unused, were utilised to execute the conversion drive in full swing.

Badaun is a district from where 51 P3 polio cases were reported in 2009. UNICEF officials said this year only one P3 case was reported.

The main cause of diseases like polio and other epidemic are dry latrines in unhygienic villages, illiteracy of the villagers and widespread poverty.

Studies conducted in villages where dry latrines were converted reveal that the rate of epidemic has come down.