Less than a third of ruralites have access to tap water 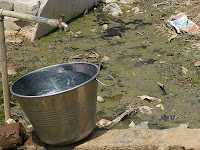 Painting a dismal picture, a government survey revealed that only 30 per cent of rural population had access to safe drinking (tap) water in the country.
It said 55 per cent depend on tube well or hand pumps to meet their drinking water requirement.The findings are stated in the National Sample Survey Office (NSSO) study on Housing Condition and Amenities in India, 2008-09.

It may be recalled that the government is working on a comprehensive water policy to charge for the use of the natural resource.
In public outburst yesterday, the Planning Commission Deputy Chairman Montek Singh Ahluwalia had said the country needs to charge a reasonable price for water to minimise wastage.

The report of NSSO reveals that 15 per cent of rural populations were still looking for a dependable source of water.

The study also brings out that even in Urban India there are still eight per cent population that does not have any drinking water source although in this case 74 per cent urban population have access to safe drinking water.

Ahluwalia had told the India Economic Forum on Sunday that in most part of the country water was not reasonably priced leading to its wasteful use.

According to the study, nearly 65 per cent of the rural households had no toilet facility whereas 11 per cent of urban households did not have this basic amenity.

It indicated that about 75 per cent of the household in the country had electricity for domestic use.

Around 66 per cent households in rural areas had this facility compared to 96 per cent in urban areas.

Interestingly, the study reveals that just 18 per cent of the rural households had access to three basis amenities at their premises including drinking water, toilet and electricity.

Around 75 per cent of the married couples in urban as well as rural areas have separate roo, the survey said.