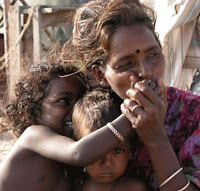 India has failed to make any significant improvement in its poverty figures, with over 400 million -- more than the total in the poorest African nations -- still struck in poverty, the Human Development Report 2010 said today, listing India at the 119th position on the Human Development Index.
Though India has jumped one position during the last five years, it continues to have high absolute poverty of people living below USD 1.25 per day along with high incidence of multidimensional poverty which is characterised by lack of access to health, education and living standards.
"Eight indicant states with poverty as acute as the 26 poorest African countries, are home to 421 million multidimensionally poor people, more than the 410 million people living in those African countries combined," says the Report issued by the UN Development Program, highlighting the magnitude of people subjected to "widespread deprivations".

"That success doesn't mean fast growth but how it shapes overall access to essential necessities like health, education, and living standards," says Emma Samman, who is a consultant to the research team that prepared the report.

At present, about 1.75 billion people live in multidimensional poverty and 1.44 people live below absolute poverty in the world.

While Norway, Australia, and New Zealand lead the world in HDI achievement, Niger, Democratic Republic of Congo and Zimbabwe figure at the bottom of the pile among 169 countries in HDI which is a composite national measure for health, education, and income.

In sharp contrast, China moved up the HDI ladder by eight positions to occupy the 89th rank in the world during the last five years.

China is now estimated to have 16 per cent of its population living below USD 1.25 a day and 12 per cent of people caught in multidimensional poverty.

Since its inception in 1990, the UNDP's Human Development Report has become a barometer to judge how countries are performing in improving the social, economic, and political wellbeing of their population.

"The past 20 years have seen substantial progress in many aspects of human development," says the report.

"Yet not all sides of the story are positive," it argues, pointing that "these years have also seen increasing inequality -- both within and across countries -- as well as production and consumption patterns that have increasingly been revealed as unsustainable".

Along with the poorest countries -- Niger, Ethiopia, Rwanda, Tanzania, and Mauritania -- that suffer from multidimensional poverty, India also figures prominently in having 55 per cent of its population affected by "widespread deprivations".