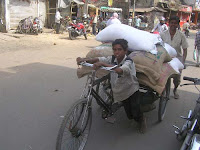 The unemployment rate in the labour force was estimated to be 9.4 per cent during the 2009-10 financial year, a government survey has said.
According to the first national level household survey conducted by the Labour Bureau, out of 1,000 employed persons, 455 were employed in agriculture, forestry and fisheries group during this period.
The survey was conducted with a view to study the overall employment-unemployment situation in 300 districts of 28 states and union territories except the North Eastern states, a government release said today.
It also revealed that out of 1,000 persons employed, 439 persons were self-employed.The worker-population ratio was estimated at 325 persons per 1,000 persons.
A total of 45,859 household schedules were canvassed during the survey, out of which 24,653 were in rural areas and 21,206 are in urban areas.
Another finding that emerged out of the survey was that the sex ratio (number of females per 1000 males) was estimated at 917 for the rural and urban sectors combined, with 915 in the rural areas and 924 in the urban areas, the release said.
The literacy rate for the population of age group 7 years and above was estimated to be 77.7 per cent at the overall level, with 74.6 per cent in rural areas and 86.0 per cent in urban areas.