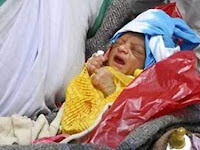 Nearly 14 lakh infants died of five preventable medical conditions in India during 2005 due to want medical intervention, says a latest study, raising concern that neonatal death rate is not falling fast enough in the country.
The study led by Registrar General of India estimates 23 lakh child between the age group of 1-59 months died during the year 2005 in which nearly 14 lakh died from preventable causes like Pneumonia, Diarrhoea, premature birth and low birth weight, delivery infections and trauma and suffocation during the delivery process.
The results were presented in two categories- deaths within one month of birth and deaths within 1-59 months of birth. The study published in the latest issue of medical journal Lancet shows nearly 10 lakh infants succumbed within one month of their birth while another nearly 13 lakh died before completing their fifth birth day.
This figure corresponds to more than 20 per cent of all deaths in children younger than five years worldwide, which is more than in any other country, it says.
Another important factors that came to light is that in neonatal category where children died within one month of their birth it is boys who record higher mortality. Nearly 5.6 lakh boys died in the category corresponding to 4.4 lakh girls, the results show. However, in age group of 1-59 months months, girls in every region die more commonly than boys.
"Inequities in access to care, rather than biological or genetic factors, are a more plausible explanation for these recorded differences between sexes," the authors said.
The researchers expressed concerns that neonatal death rates in India are not falling fast enough.
"However, our results suggest that almost half of India's neonatal deaths are caused by birth asphyxia and birth trauma, sepsis, pneumonia, and tetanus-most of which can be avoided by increases in delivery and postnatal care," authors said in a statement.
The study shows premature birth and low birth weight and delivery related issues were leading preventable causes behind the deaths of eight lakh neonates who died within one month of their birth.
In the category of children succumbing before completing five years of age, pneumonia and diarrohea were the leading causes resulting in six lakh deaths, it said.
"Expanded neonatal and obstetric care, case management of diarrhoea and pneumonia, and the addition of new vaccines to immunisation programmes could substantially reduce child deaths in India," the study says.