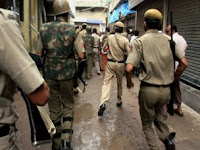 Tightening its scrutiny of police encounter cases, the National Human Rights Commission has directed all the state governments to report such incidents to it within 48 hours.
"All the cases of deaths in police action in the states shall be reported to the Commission within 48 hours," the NHRC said in fresh guidelines on the procedure to be followed by police in cases of encounter.
The Commission, revising its previous guidelines under which police had to report cases of encounter only once in six months, has also made it mandatory for them to send a second report about all such deaths "within three months" from the date of incident.
The second report should include post-mortem report, inquest report, and finding of enquiry conducted by magistrate and senior officers concerned, the revised guidelines of the Commission said directing the states.

The cases of culpable homicide lodged against policemen could now be investigated by any "specialised investigation agency" too, the guidelines stipulate.

Earlier, it was only the state's crime investigation department which had jurisdiction to probe cases of culpable homicide lodged against policemen.

"Whenever a specific complaint is made against the police alleging commission of a criminal act on their part, which makes out a cognisable case of culpable homicide, an FIR to this effect must be registered under appropriate Sections of the IPC.

"Such cases shall be investigated by state CBCID, or any other specialised investigation agency," NHRC's revised guidelines say.

The Commission has also sought that not only the relatives of the deceased, but eye-witnesses, witnesses having information of the circumstances leading to the encounter and police station records "must also be examined" by the magistrates conducting inquiry into such cases.