Much of planet could see extreme drought in 30 years: study 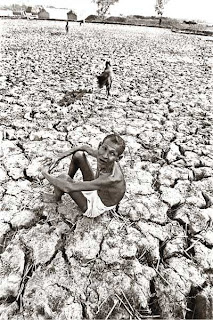 Large swathes of the planet could experience extreme drought within the next 30 years unless greenhouse gas emissions are cut, a study released warns.
"We are facing the possibility of widespread drought in the coming decades, but this has yet to be fully recognized by both the public and the climate change research community," National Center for Atmospheric Research (NCAR) scientist Aiguo Dai, who conducted the study, said.

"If the projections in this study come even close to being realized, the consequences for society worldwide will be enormous," he said.

Parts of Asia, the United States, and southern Europe, and much of Africa, Latin America and the Middle East could be hit by severe drought in the next few decades, with regions bordering the Mediterranean Sea seeing "almost unprecedented" drought conditions, the study says.
Meanwhile, higher-latitude regions from northern Europe to Russia, Canada, Alaska and India could become wetter, according to the study published in Wiley Interdisciplinary Reviews: Climate Change.

But increased moisture in those regions would not make up for the drier conditions across much of the rest of the world.