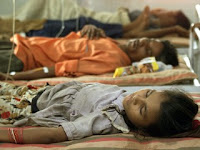 Malaria kills more than 200,000 people in India each year, 13 times higher than UN estimates, according to a paper published by The Lancet.
The UN's World Health Organisation (WHO) says that the malarial death toll in India, the most populous country where the disease is endemic, is around 15,000 annually, comprising 5,000 children and 10,000 adults.

But the new study says the WHO's reporting method is flawed, as it depends indirectly on patients who have been diagnosed by a doctor.
Many deaths in India occur at home, rather than in a hospital or a clinic, which means the underlying cause of many malaria fatalities is likely to be misattributed, it says.

Investigators sent out field workers to 6,671 randomly-selected areas of India to interview relatives or careworkers of 122,000 people who had died between 2001 and 2003.

The field workers sent back a half-page report on each case as well as answers to specific questions which were asked if the individual had died of a fever.

This data was then analysed separately by two physicians, who each gave an independent opinion of the underlying cause of death. A review board adjudicated in cases where there was a dispute.

The doctors determined that 3.6 per cent of deaths they attributed among people aged one month to 70 years occurred from malaria. Ninety per cent of these happened in rural areas and 86 per cent occurred outside of a health-care facility.

The authors say the WHO may also hugely underestimate the toll of malaria in other countries, which would have big repercussions for health policy.

"If WHO estimates of malaria deaths in India or among adults worldwide are likely to be serious underestimates, this could substantially change disease control strategies, particularly in the rural parts of states with high malaria burden."

According to the WHO's website, "nearly one million" people died from malaria in 2008, most of them African children.