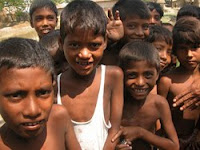 India has highest prevalence of underweight children under five and the level of hunger there is "alarming" as the country ranks 67, out of 84 countries, on the Global Hunger Index, a new study has found.

About 40 per cent of under-five children in India, Bangladesh, Timor-Leste, and Yemen were underweight, while Afghanistan, Angola, Chad, and Somalia have the highest under -five mortality rate - 20 per cent or more, a report by Washington-based International Food Policy Research Institute (IFPRI) has found.
"Globally, the biggest contributor to the world GHI (Global Hunger Index) score is child underweight," it said. The GHI was calculated on three factors - the proportion of people who are undernourished, the proportion of children under five who are underweight, and the child mortality rate.

The report found that in South Asia, India was among the countries with hunger levels considerably higher than their GNI (Gross National Income) per capita would suggest, while China had considerably lower hunger levels.

In India, the report said, the "high" GHI scores "were driven by high levels of child underweight resulting from the low nutritional and social status of women in the country."

"Conflict, disease, inequality, poor governance, and gender discrimination were factors that can push a country's level of hunger higher than what would be expected based on its income," it noted.

"India alone accounts for a large share of the world's undernourished children," the report said, citing a previous survey by the World Health Organisation, which found that in 2005-06, about 44 per cent of Indian children under age five were underweight and 48 per cent were stunted.

"Because of the country's sheer size, these numbers mean that India is home to 42 per cent of the world's underweight children and 31 per cent of its stunted children," IFPRI researchers noted, referring to a UNICEF report.

Overall, the survey puts 29 countries in the"alarming" and "extremely alarming" category with the latter being in the Sub-Saharan Africa -- Burundi, Chad, the Democratic Republic of Congo, and Eritrea.