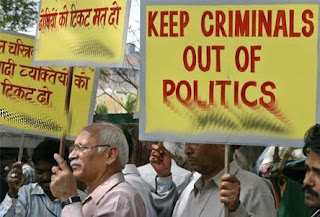 For a state seeking to erase the taint of corruption and lawlessness, this sure is a step backwards. As top politicians campaigning for candidates with criminal records. The criminal and financial background of the candidates who will contest phase 2 and phase 3 of the poll is revealed. It may be taken that the same pattern would have been repeated for the candidates of phase 1.

It is true that these self confessed criminals are contesting the polls under different party symbols. But the differences among them are at best symbolic.The respective party affiliations are symbolic. The common purpose of the Criminal Party is substantive. Recall the corruption spread across different parties being exposed in the CWG probe. Much more may be revealed with passage of time. It does not matter who will become the CM of Bihar. It will not matter in the future who will become PM of India. The agenda will be set by the Criminal Party. No PM or CM will dare deviate from its agenda. This is the bald truth. Indians must learn to live with this truth. FYI, Living in self delusion invites the slow but inevitable death of democracy in India.