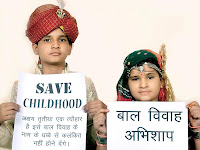 The National Commission for Women said it was "alarming" that around 70 per cent of girls are below 18 at the time of their marriage in Hindi-speaking states like Uttar Pradesh, Madhya Pradesh, Rajasthan and Bihar.
According to NCW reports, 73 per cent girls under 18 marry in Madhya Pradesh followed by Rajasthan 68 per cent, Bihar 67 per cent and Uttar Pradesh 64 per cent.However,In Andhra Pradesh too 71 per cent girls tied the knot while still below 18.
Even in two districts in Kerala there was child marriage despite education being "quite good" in the state.

Now, there is urgent need for uniformity in marriageable age for men and women.There should not be any kind of harassment of women and no room for discrimination.