Urban slum population to be 93.06 million by next year 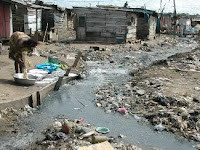 There has been a growth of 17.8 million in urban slum population of the country in the last decade, according to a government committee formed to create a "reliable statistical model" of enumerating people living in such areas.
The Committee headed by Pranob Sen, Principal Advisor to the Planning Commission, states that the projected slum population in the country for the year 2011 would be 93.06 million from the 75.26 million estimated in 2001.
However, Minister of Housing and Urban Poverty Alleviation Kumari Selja said such a trend was expected due to increase in urbanisation but assured that the percentage of slums will come down due to government programmes for slum-development.
The Committee's report, submitted on August 30 to her Ministry, also gave a broader definition of slums to replace the existing one used by Census of India and the states.

"The Committee suggested to adopt a normative definition based on appropriate indicators and checklists for the purpose of identification of slum areas and enumeration of population of area with 20-25 households having slum-like characteristics in an enumeration block in census 2011," Selja said.

All clusters of 20-25 or more households having no roofs or non-concrete roofs, and not having any facility of drinking water, toilets or drainage would be considered as slums. Earlier, the cluster size for identification of slums was 60 households.

The minister said there was "paucity of correct data earlier" as small towns were left out.

The new definition would serve as a guideline for Slum Census 2011 and also help in better implementation and wider coverage under the Rajiv Awas Yojana for slum-dwellers.

Selja said the Committee has recommended that for policy formulation purposes- for Slum Census 2011- it is absolutely essential to "count the slum population even in cities having less than 20,000 population".

The Sen Committee applied its statistical model in all 5,161 urban areas of the country, including 3,799 statutory towns, Selja said.
The Committee has recommended that the Registrar General of India should share with HUPA the layout maps when they are released, for use in planning purposes and as an aid to slum surveys.

"The Ministry would work closely with the RGI to carry out the ground verification of slum clusters within the identified enumeration blocks to finalise the Master Frame of slums in the country," Selja said.