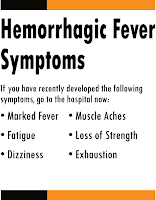 Amid concern over rising dengue cases ahead of Commonwealth Games, there is now some relief with experts saying that the strain of the hemorrhagic fever in circulation this time is the least life threatening.
Dengue fever has four known strains worldwide out of which type-III is the most lethal and type-I the least life threatening, Dr V M Katoch Director General of the Indian Council of Medical Research (ICMR) said.

In India, the type I strain of dengue has been prevalent for quite some time and has very less severity, Katoch told.
"Though the type II strain was dominant when dengue fever made a comeback in the country, the type I strain has prevailed since the last major outbreak four years ago".

The comparative severity of the type I strain is low at less than one per cent. Out of the over 1,100 cases reported in Delhi so far, there have been only three deaths.

Most dengue infections result in relatively mild illness, but some can progress to dengue hemorrhagic fever.

The time between the bite of a mosquito carrying Dengue virus and the start of symptoms averages 4 to 6 days, with a range of 3 to 14 days.

An infected person cannot spread the infection to other persons but can be a source of dengue virus for mosquitoes for about six days.

All four types of dengue fever produce the same symptoms, though there is no cross-immunity among the types.

According to Health Secretary Sujatha Rao, though the government is all geared up to contain the disease, the public should take heart from the fact that it is the least virulent strain.

With dengue cases crossing last year's figure of 1,153 in Delhi, the Government has launched a special cleaning drive to prevent breeding of mosquitoes.

Three persons have died in the capital so far. According to statistics released by the Municipal Corporation of Delhi, the number of cases till this time in 2009 was only four.