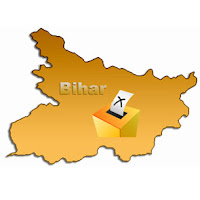 About 110 members of Bihar Legislative Assembly have pending criminal cases against them, including for serious crimes such as murder, kidnapping and extortion, says a new survey.
According to a latest survey conducted by Association of Democratic reforms and National Election Watch, an umbrella body of about 1,000 NGOs across the country, a total of 109 MLAs in the 243-member Assembly have criminal cases pending against them.

The ADR-NEW analysed affidavits of 233 MLAs and found that 109 had pending criminal cases against them when elected. A highest of 39 MLAs were from JD(U), followed by 32 from BJP and 19 from RJD among others.

Six people from LJP and three from Congress had criminal cases pending against them when they were elected, the data claimed.

A highest of 32 cases were registered against Pradip Kumar, an independent candidate who won the election from Warsaliganj constituency, followed by 25 cases against Kishore Kumar, who won the poll from Sonbarsa.

"MLAs like Rajesh Kumar Raushan (RJD) from Kesariya and Manoranjan Singh (JD-U) from Baniapur, all were charged with more than 15 IPC sections related to murder, kidnapping and robbery," the survey said.

The Association has demanded that upcoming Bihar assembly election should be free of candidates having criminal background and urged the political parties not to give tickets to tainted candidates.

The six-phase elections in 243-member Legislative Assembly in Bihar are scheduled from October 21.

An attempt must be made to change the trend which existed in the Bihar Assembly election, 2005. Parties before releasing their list of candidates for the elections should make sure that they do not field any candidates with criminal background.

"Cong poll list in criminal shadow"
(HT:: 23:25 IST(25/9/2010)
Rahul Gandhi's zero-tolerance policy for criminals in the Congress seems to be in danger in the Bihar elections. As the party gears to announce its list of candidates, the possibility of criminals getting tickets looms. The state poll committee has recommended the names of some hardcore criminals to the central panel.

Kushwaha, who is an aspirant from Bhagalpur constituency, faces many criminal charges. His candidature has prompted a father of a girl allegedly abducted and raped by him in 1988 to write a distressed letter to Gandhi, pointing to the agony the family had to face during the 2005 assembly elections when the Congress fielded Kushwaha.

Congress president Sonia Gandhi had to cancel her meeting in Kushwaha's constituency in the 2005 polls after the victim's family wrote a letter to her. He has been in and out of the Congress several times.

Khan, seeking a Congress ticket from Narkatiaganj, had joined the party along with Sadhu Yadav, RJD chief Lalu Prasad's brother-in-law, ahead of the 2009 Lok Sabha elections. Facing many criminal charges, Khan, however, contested as an independent in parliamentary polls after the Congress denied him a ticket.

Ram, Rai and Rao, against whom murder cases have been registered in various police stations, are Congress aspirants from Ramnagar (reserved), Govindganj and Bettiah.

The party is also likely to give tickets to Lovely Anand and Ranjita Ranjan, wives of jailed bahubalis (muscle men) Anand Mohan and Pappu Yadav.

The party is, however, trying to keep it upbeat by invoking Bihar pride with the slogan "Aab zaroorat hai kaam ki, Bihar ke unche naam ki" (Now, there is need for development and enhancing the name and image of Bihar).