Nanded suspected to have 12,000 malnourished children 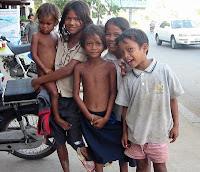 Nanded district is suspected to have 12000 malnourished children, a survey in 'Balwadis' by district administration has revealed.
A total of 12,718 children were found underweight in Nanded district and they might be the cases of malnutrition, official sources said. Loha tehsil has the maximum of such children, sources in the administration said.
Children studying in 424 'Balwadis' in addition to the neonates in the district are checked by the integrated child welfare department and the Primary Health Centers (PHC's) once in three months. During these check ups, it was revealed that more than 12.7 thousand children are underweight and might be malnourished, they told.

They all belong to the age group of 0-6 years and were found to be in different categories of the malnutrition.

It is mandatory for the health department to keep these children under observation and give them nutritious food and medicines, sources said.