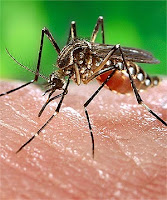 In what may help develop more effective repellents, scientists claim to have discovered that malaria mosquitoes use several different kinds of odour sensors to sniff out their human prey.

For years, it's known that Anopheles gambiae -- the species of mosquito that spreads malaria which infects 250 million and kills 900,000 people annually -- use one family of odour sensors to track its human prey.

Now, a team at Vanderbilt University has found that the mosquitoes possess a second set of olfactory sensors that are fundamentally different from the set of sensors which was known to researchers for the last 10 years, the latest edition of the 'Public Library of Science Biology' journal reported.
According to the scientists, they also have preliminary evidence that the mosquito's olfactory system may include additional families of sensors as well.

"It's not at all surprising that the mosquito's olfactory system is more sophisticated than thought. Olfaction is absolutely essential to the mosquito. If the female cannot find a host for a blood meal she cannot reproduce.

"As a result, mosquitoes have developed an uncanny ability to detect odors. This is true of all species of mosquitoes, not just Anopheles.

"So it is highly likely that the mosquitoes that spread West Nile, dengue fever, yellow fever and encephalitis also have similar odour sensors," Laurence Zwiebel, who led the team, said.

According to the scientists, the discovery may help explain a puzzling question that has been plaguing researchers trying to develop new and more effective forms of mosquito lures and repellents.