Dengue mess ahead of CWG: Cases rising, DBCs on strike 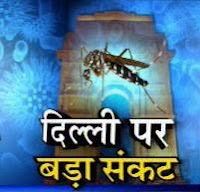 Even as dengue cases in the month of August reach a five-year high in the national capital, MCD contract workers undertaking door-to-door checks to prevent mosquito breeding have gone on a strike from today demanding regularisation of their jobs.
The strike by 3,500 domestic breeding checkers (DBCs) are on indefinitely cease work from September six in support of their demand will compound problems for the MCD which is already grappling with rapid increase in dengue cases. All the 3,500 DBCs have signed a letter stating that they will only get back to work after their demands have been met.

With the total cases of the vector-borne disease crossing 1200, MCD statistics shows that the number of cases till this time in 2009 was only 12.

MCD officials said stagnation of water at various sites due to Commonwealth Games construction work, heavy rains and humid weather have aided mosquito breeding. The situation is causing concern as the Games will be held in the month of October which generally witnesses high prevalence of dengue.

According to records, in 2009, the month of August recorded only two dengue cases last year while there were 33 cases in September, 337 in October and 713 in November. If the same trend continues, cases could be well past the 2006 total figure of 3,366 this season.

MCD insists that it was trying its best to tackle the situation. Officials said the civic body has issued 53,357 legal notices for mosquito breeding and launched prosecution against 8,805 people, 1,321 of them in this week itself.

Breeding has been found at a number of hospitals, government offices and educational institutions.

However, the DBCs, who are the eyes and ears of the corporation in preventing mosquito breeding, are now on the path of agitation. After a token strike today, they are gearing up for an indefinite ceasework till demands are met.

While, MCD officials maintained that the civic body is facing a funds crunch and is not in a position to regularise 3,000 people. Choudhary, however, pointed out that 7,000 sanitation workers were being regularised by the civic body.