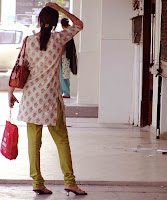 Seventy-seven percent of girls feel that eve-teasing is the biggest challenge they face in Indian cities like Delhi, Mumbai, Calcutta, while 69 percent feel cities offer an unsafe and insecure living environment, a survey revealed.
At the same time 53 percent surveyed agreed that better employment opportunities in cities are an advantage and one in every four girls said that cities offered better access to healthcare services and provided requisite space for leisure activities, according to the NGO that works for child rights.

The report reveals that 74 percent of girls feel most vulnerable in public places, 40 percent coped with harassment by ignoring it and 39 percent urged an alert and effective police force as a prerequisite for an ideal city.

The report, NGO said, is an attempt to highlight and address the issues faced by urban adolescent girls in their living and communication spaces. With the urban population expected to reach 586 million by 2030, more than 50 Indian cities are expected to have a population of over a million people, half of them being girls and women. The cities offer the greatest opportunities as well as some of the greatest risks.

Across the country, girls face double discrimination because of their gender and age, leaving them at the bottom of the social ladder. Women and children, especially girls, are worst effected in the process of rapid urbanization. NGO's report also offers an analysis of the experiences and challenges faced by girls in accessing and benefiting from these fast paced opportunities.

Actor and activist Shabana Azmi said: "Amartya Sen has said that a country's progress cannot be measured by its GDP alone, but also by its Human Development Index, in which the empowerment of women and the girl child is a very important indicator."

About 44 percent of the girls surveyed were aware of Internet, but only 15 percent had; 21 percent were aware of the possible misuse of personal information on the Internet and barely 9 percent knew who to and where to report cyber crimes.

The report was drawn up on the basis of a study commissioned by NGO covering 10,000 girls in 10 Indian cities. It included girls from different age-groups - 14 to 17 years and 18 to 21 years - and from different socio-economic backgrounds including residents of urban slums, the homeless and students.