Poverty is now linked to depression in mothers 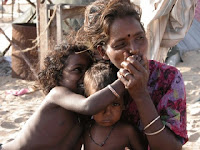 More than half of babies born in poor families are raised by mothers suffering from depression, potentially creating problems in grooming of their children, say US researchers.
One in nine infants in poverty had a mother with severe depression and such mothers typically breastfed their children for shorter periods than other poor mothers, The Washington Post reported citing researchers at the Urban Institute, a US-based think tank.
"A mom who is too sad to get up in the morning won't be able to take care of all of her child's practical needs," said researcher Olivia Golden, who co-authored the paper with his two colleagues at the institute.

"If she is not able to take joy in her child, talk baby talk, play with the child - those are features of parenting that brain development research has told us contribute to babies' and toddlers' successful development."

The report suggests that even severe depression goes largely untreated among low-income mothers of infants, with just 30 percent speaking to a professional about a mental health problem during the year before the survey was conducted.

"With at least 70 percent needing help, the problem is significant and "we should focus on closing that gap," Golden said.

The experts pointed to unnoticed opportunities for helping these families, most of whom come in contact with social services programmes such as food stamps and the Special Supplemental Nutrition Program for Women, Infants and Children (WIC).

The health-care overhaul will also open up insurance to many such mothers who did not have coverage before and will expand home-visiting for parents, the report suggests.

Depression was not uncommon for mothers of infants in all income brackets, with 41 percent reporting symptoms and 7 percent citing severe symptoms.

For babies with severely depressed mothers in poverty, 87 percent were breastfed for four months or less. Though the American Academy of Paediatrics recommends the practice at least through the first year of life.

Low-income mothers of infants were typically not teenagers, Golden said, but young - in their early 20s - with more than half under 24.

The severely depressed group was 44 percent white, 30 percent black and 21 percent Hispanic, the findings said, adding that these mothers were at greater risk of domestic violence and substance abuse than poor mothers who were not depressed.

The research was based on a data from a federal education survey of 14,000 children born in 2001. Mothers were interviewed when their children were 9 months old about their personal and family circumstances.