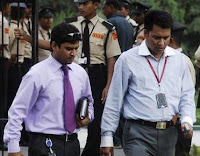 An overwhelming number of Indian employees feel that they must leave their existing organizations for advancing in their careers, a study said.
"India, as a matter of fact, is ranked the highest at 56 per cent where a majority of the employees feel they have to leave their organisation to advance to a higher job," a Towers Watson's Global Workforce Study, said.

"The top management in India Inc needs to review the career advancement programmes for their employees if they have to retain talent in what promises to be a prolonged growth phase of the business cycle," Towers Watson India's Managing Director, said.

Towers Watson conducted the global workforce study in India between November 2009 to January 2010. It surveyed employees in the 25-35 years age-group, predominantly male, having less than five years work experience, in mid-management levels of medium-sized organisations with employees between 1,000 and 4,999, a statement issued said.