Regularisation of 1,639 colonies at the earliest: Delhi Govt 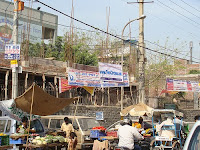 Delhi Government today said it has accelerated the process of regularising 1,639 unauthorised colonies which were given provisional regularisation certificates in 2008.
Delhi Finance Minister A K Walia said the Government has been striving hard to complete all the formalities to ensure formal regularisation of all the 1,639 colonies at the earliest.

Walia held a high level meeting to discuss the issue which was attended by top officials of various agencies including MCD, DDA, Planning and Urban Development department.
Directing the agencies to provide basic civic amenities at the earliest, he said lakhs of people residing in these colonies must get benefits of proper drinking water, sewerage and power.

Walia said the Survey of India has cleared all 118 colonies which came up on DDA land. The Forest Department has also been instructed to examine the cases of 86 such colonies which fall partially on forest land. The department has been told to submit its final report by first week of July.

Officials said out of 1639 colonies, digital data of 1,115 colonies have been prepared.

This will facilitate the MCD to prepare final layout plans in respect of all unauthorised colonies.

The MCD has further been told to prepare final layout plans in respect of 309 colonies which have been cleared by the Survey of India.