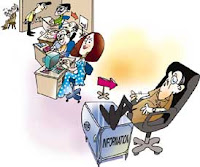 India has the most inefficient bureaucracy in Asia and red-tape is much worse than in China, says a survey.
In the ranking of 12 countries, India has been named as having the most inefficient bureaucracy followed by Indonesia and the Philippines, according to the survey of expatriate business executives conducted by the Hong Kong-based Political and Economic Risk Consultancy (PERC).

Quoting the consultancy, news agency AFP has reported that bureaucratic red-tape is a serious problem in India and China but "the differences in the political systems of these two countries have made inertia much worse in India than in China".
The ranking is based on a scale from one to 10 and a score of 10 indicates the worst possible scenario. India scored 9.41, followed by Indonesia (8.59), the Philippines (8.37), Vietnam (8.13) and China (7.93).

As many as 1,373 middle and senior expatriate executives participated in the survey conducted earlier this year.

Writing about India, PERC said, "politicians frequently promise to reform and revitalise the Indian bureaucracy, but they have been ineffective in doing so--mainly because the civil service is a power centre in its own right".

The consultancy noted that dealing with India's bureaucracy "can be one of the most frustrating experiences for any Indian, let alone a foreign investor".

PERC noted that bureaucracies in some Asian countries have become power centres in their own right, allowing them to effectively resist efforts toward reforms by politicians and appointed officials.