Suicides due to hardships in life, job loss up sharply in 2009 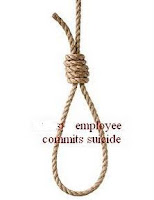 The number of people who committed suicide in Japan in 2009 stayed above 30,000 for the 12th consecutive year, with suicides due to hardships of life and losing jobs rising sharply, a survey has shown.
The number of suicides 2009 totaled 32,845, up 1.85 per cent from 2008, the National Police Agency said in a revised report.

Of the total, 24,434, or 74 per cent, were listed as suicides for which reasons were made clear due to notes left by those who killed themselves or the knowledge of people close to them, the NPA said.

Suicides traced to losing jobs surged 65.3 per cent to 1,071 while those attributed to hardships in life increased by 34.3 per cent to 1,731.
Depression continued to top the list of reasons for the third consecutive year, rising by 7.1 per cent from the previous year to 6,949.The NPA revised the categorisation of reasons and motives for suicide in 2007. Under the new categorisation, suicides are divided into 50 reasons with up to three reasons listed for each suicide.

The rate of suicides among those in their 20s was an all-time high for that age category for the second straight year, the survey said.

The rates topped 30 among people in their 40s to 60s, it added.The number of suicides in Japan grew sharply in October 2008, a month after Lehman Brothers Holdings Inc collapsed, throwing the global economy into a prolonged recession.