Cancer risk if you use mobile for 30 min a day: Study 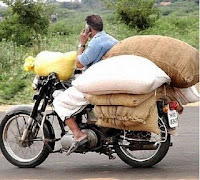 Talking on a mobile phone for more than half an hour a day could increase the risk of brain cancer by up to 40 per cent, a study has indicated.
The biggest investigation of its kind found that people who regularly held long conversations over many years might have an increase in the risk of developing a tumour.

But the researchers said the results were not conclusive and that -- even if the risks were real -- it would equate to just a few hundred more cases in Britain.

Despite scientists in 13 countries contributing to the 10-year, 15-million-pound Interphone project, they said the findings were open to statistical error, The Daily Telegraph reported.

The study appeared to show that, for most people, there was no link between the amount of time spent on the phone and the susceptibility to brain tumours.

But researchers could not rule out that heavy use -- which is becoming more common now -- would pose a risk in the long term.

Elisabeth Cardis of the Centre for Research in Environmental Epidemiology in Barcelona, who led the study, said: "We can't just conclude that there is no effect. There are indications of a possible increase.

"We're not sure that it is correct. The indications are sufficiently strong... To be concerned."

British scientists involved in the study, however, played down the risk, saying the research was inaccurate because it involved asking patients to recall their use over the last 10 years.