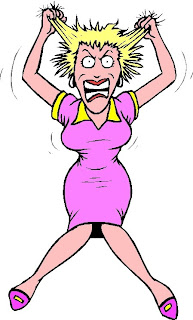 When under stress, women engage in social networking and try to befriend people, while men react in the opposite and become anti-social, a new research has claimed.
A study by a team psychologists at the University of Southern California led by Mara Mather showed that stressed men and women react in opposite ways.

Earlier scientists have said that when people are under immediate stress, like "when we are about to give a speech or about to be mugged, we either fight or flee or so" but now some psychologists, including Shelley Taylor of the University of California, are suggesting that this scenario may apply mainly to males.

"Men get antisocial under pressure, but women tend to react in the opposite way: they tend and befriend, engaging in nurturing and social networking," Taylor said.

In their study, Mather's team, which presented their findings at the Cognitive Neuroscience Society 2010 annual meeting, found this theory true, Scientific American reported.

They asked male and female participants to place their hand in ice water for three minutes, an activity that makes levels of the stress hormone cortisol shoot up over the next hour or so.

Then these subjects and a comparison group, whose hands had been comfortably immersed in warm water, looked at angry or neutral faces while lying inside a brain scanner.These conditions revealed a striking sex difference in the brain in the extent to which men and women process faces, and perform emotional assessments of others, under stress.

The men under the influence of high cortisol levels showed less activity in a key face-processing region of the brain (the fusiform face area or FFA) than the unstressed men did, suggesting that stressful situations diminish the ability of men to evaluate facial expressions.

By contrast, the brains of the women under strain worked harder on the faces: in these females, the FFA was more active than it was in women who did not experience the cortisol boost.

This sex difference was apparent not only in the face evaluation area, but also in a circuit of regions that enables people to internally simulate and understand the emotions of others.

According to the analysis, stress appeared to increase the flow of information between these regions and the FFA in women, orchestrating a concerted response. But in males, cortisol worked to disconnect the brain's analysis of facial expression from its evaluation of others' emotions.Women do seek out affiliation during difficult or threatening times, she says, whereas men don't.

Women's ability to read people's expressions more intensely could partially underlie this propensity to bond under such circumstances.