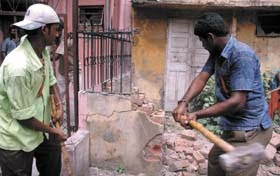 The Central Information Commission (CIC) has directed the Municipal Corporation of Delhi (MCD) to put up on its website a complete list of all existing and on-going unauthorized constructions and encroachments on public land in Delhi.

The direction came on an application filed under the Right to Information (RTI) by one P.C. Pande, an undersecretary with ministry of commerce and industry of the central government.

Pande had asked the MCD for complete details of existing and ongoing unauthorized construction and encroachment of public land in Delhi and action taken against them. But when he did not get a satisfactory reply, he approached the CIC.

"The PIO (Public Information Officer) has not provided information about 'zone wise complete details of existing and ongoing unauthorised construction and encroachment of public land in Delhi' but has transferred the RTI application to 12 PIOs in 12 zones," Information Commissioner Shailesh Gandhi noted in his order.

He directed the MCD to give zone-wise number of bookings of unauthorised constructions across the national capital before April 30.

The MCD is among the world's largest municipal bodies providing civic services to an estimated more than 13.78 million citizens in Delhi. It covers nearly 96 per cent of the total city area, which it has divided into 12 zones.

Gandhi also directed the MCD to send a compliance report to the CIC about the matter by June 5.