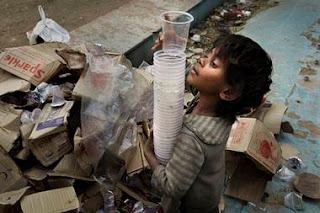 The global economic crisis has slowed the pace of poverty reduction efforts in the developing countries and some 920 million people will remain in extreme poverty by 2015, a new report says.
The report released jointly by the World Bank and the International Monetary Fund said the crisis is having an impact in several key areas of the Millennium Development Goals (MDGs), Xinhua reported.
Those areas, among others, include the goals related to hunger, child and maternal health, gender equality, access to clean water, and disease control.

Agriculture, seen as vital for development, has also been affected by low levels of investment over the past few decades and issues like climate change.

The crisis will continue to affect long-term development prospects well beyond 2015, the report, titled "Global Monitoring Report 2010: The MDGs after the Crisis", said.

As a result of the crisis, 53 million more people will remain in extreme poverty by 2015 than otherwise would have, the report said.

Meanwhile, the report projects that the number of extreme poor could top 920 million five years from now, marking a significant decline from the 1.8 billion people living in extreme poverty in 1990.