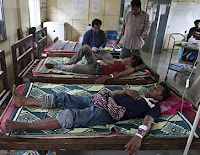 About 850,000 people die each year from a mosquito bite - with nearly 90 percent of all malaria deaths in sub-Saharan Africa, the UN Children's Fund (Unicef) said.
Ahead of World Malaria Day Sunday, Unicef Executive Director Ann Veneman said there were only 250 days left to meet the challenge set by UN Secretary-General Ban Ki-moon for all endemic countries to ensure universal coverage of malaria control interventions.
Unicef said there has been a significant increase in insecticide-treated bed net coverage in several African countries, with distribution campaigns reaching those most in danger of contracting malaria - the poor and rural populations.

But these campaigns needed to be expanded, along with the increased use of Artemisinin-based Combination Therapies to treat patients.

"The fight against malaria can be won and now the world must unite to ensure that no one dies from a mosquito bite," Veneman said.