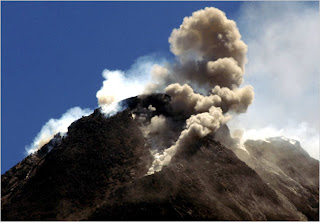 Iceland's volcano has spewed about 140 million cubic metres of ash over the past few days, Icelandic scientists have said.
The Institute of Earth Sciences of the University of Iceland estimated that about 100 million cubic meters of ash rose into the air from Eyjafjallajokull volcano and was blown across northern Europe, cancelling thousands of flights.

Aeroflot Sunday cancelled 42 flights but there were signs of an easing of the disruption, as Spain reopened all affected airports and Germany began to allow flights to several destinations.

They said the average magma discharge rate of 750 tonnes per second was 10-20 times greater than the average of the eruption in late March.

The scientists warned that the eruption and melting the surrounding glaciers could threaten serious flooding south of Iceland.